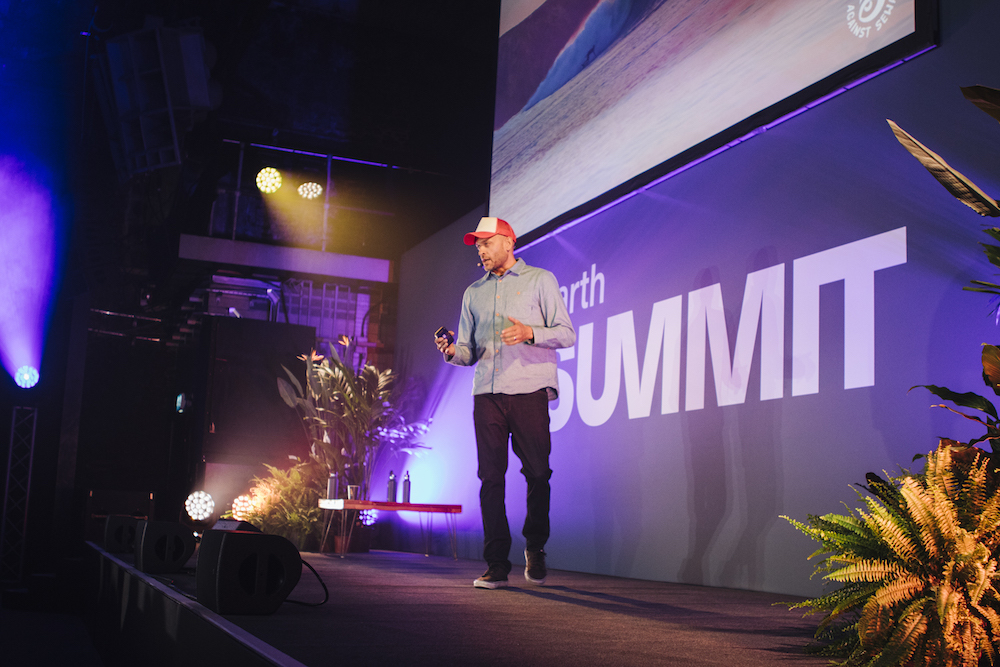 Hugo Tagholm is a Chief Executive of the national marine conservation and campaigning charity, Surfers Against Sewage. He’s spent the last 14 years taking action from ‘the beach front to the front benches of Parliament’ and mobilising more than 100,000 people to clean up the UK’s beaches and coastlines.

In our latest podcast episode, Hugo tells host, Laura Nesbitt, what he believes the UK government needs to be doing to meet its legal obligation for action on climate change.

He also spills the tea on what he’ll be talking about at this year’s Blue Earth Summit, plus more about his newest adventure leading Oceana, an organisation dedicated to protecting & restoring the world’s oceans on a global scale.

“I’ve had an incredible time leading Surfers Against Sewage and hopefully led a decade and a half of transformational change. Building the team from three people, soon to be 40 people, from a handful of volunteers to 150,000 volunteers a year and from an organisation that wasn’t influencing policy and legislation change to one that’s won and delivered policy and legislation across a range of issues is a huge achievement.”

Surfers Against Sewage has gone through several iterations. In 1991 when Hugo first became involved, Surfers Against Sewage was a single-issue campaign group set up to challenge water companies, particularly in the south west. In 2008 with his connection to surf and experience in the charity sector as an environmentalist Hugo took over and gave Surfers Against Sewage a new lease of life. A new trajectory was born – to free UK coastlines of plastic and continue to build collective action on a local level so everyday people are empowered to be a part of change.

Surfers Against Sewage has an ambition for the UK to be net zero by 2030. Net zero for those who don’t know is the reduction of carbon missions.

“We need to make sure that this country truly is committed to reducing emissions, not reopening fracking, not exploring the North Sea for oil and gas or doubling down on fossil fuels. We need to be changing the system around us that can truly have the long term gains we need, not looking at this short term reaction to the current energy crisis.”

Blue Earth Summit upholds the ethos that business is the best vehicle for change but Hugo would take that one step further in saying ‘let’s not be complacent and think that businesses that provide everything that we have today can carry on as they are.’ The changes we need to see in business in the next decade are huge and will impact all of our lives. Hugo says ‘we may need to quickly accept that some businesses in the future will just have to end, it’s that simple. There are no acceptable faces to businesses that kill the planet. We need to encourage people to do business better. Ultimately the world will still need to do business, we just have to accept that it won’t be zero impact and we need to create the systems and circularity that can support businesses to be and do good.’

“It’s exciting to see business recognising the triple bottom line and having a stronger focus on people.”

Hugo makes a strategic move to work with global organisation Oceana in November and continue to lead change on a global level restoring our oceans. Oceana is a policy and legislation focused organisation working with distinct teams of experts to change policy and legislation around the world. Surfers Against Sewage a predominantly grassroots organisation with a volunteer system consisting of scientists, activists and communication specialists whose voices on the ground are amplified by the work carried out by them and the charity. Both organisations have different resources, contacts and networks which combine to make what Hugo likes to call ‘the tool kit’ to save our oceans.

“The sewage industry made about 72 billion pounds in dividends since privatisation and only invested in the region of 5 billion in sewage infrastructure. They claim they don’t have the money to fix it, but they do.“

Surfers Against Sewage has been working hard for a decade to make sure the water industry is held accountable for all the pollution it’s causing. Water companies have been polluting our waters since the early 90’s, but with no data available, they were not held accountable. Surfers Against Sewage campaigned to get access to data and as a result water companies now have to report on their sewage spills. The UK continues to suffer with the effects of underinvested sewage infrastructure. In the last 10-15 years only 14% of our waterways meet good ecological status. There are lots of different angles you can take it from, but the one angle we need to remind yourselves of are the numbers we can take from the privatisation of water companies.

Hugo’s advice to the next generation is to not fall foul of becoming part of the establishments branding texture. In order to preserve their future, young people need to realise that their voices count and they should be calling for change now. Being told that when they are leaders in the future is the only time they can influence change then is the biggest cop out.

“Young people should not have to prop up the current business model that ruins their future.”

Catch Hugo talking about A Decade of Ocean Activism: The Big COP-out on the Forum Stage and Love / Hate: How do we Fix our Affair with Water? in the Exhibition Hall on Day 1 of the Blue Earth Summit in October. Hugo is also rumoured to be on Finisterre’s Panel Sea7 Discussion on the Camp Fire Stage on Day 1, but you’ll have to book a ticket now to secure your place. Don’t forget to join the conversation on LinkedIn

Finding Solace on Mountain Summits with The Fell Foodie