Sarah is the founder of pioneering plant-based community cookery school and charity Made In Hackney. The cookery school opened it's doors in 2012 and have since collaborated with over 30,000 Londoners inspiring them to grow, cook and eat more plants. 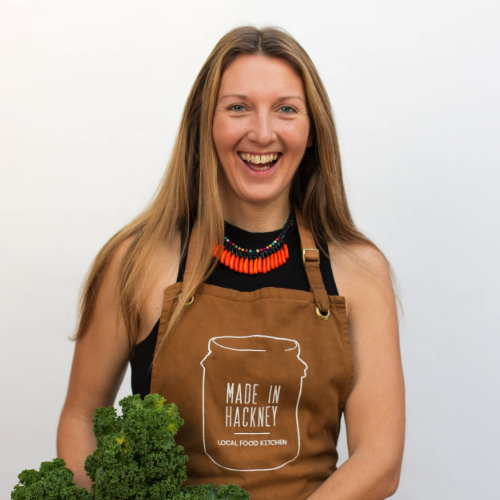 In 2009 former music journalist Sarah Bentley did what is now known as, ‘a pivot.’ After ten years working as a print and radio journalist specialising in reggae-dancehall music for titles such as The Face, ID, Touch, Music Week, The Fader and BBC World Service she started to get industry itchy foot.

The motivation behind her journalism was to make a positive difference – to tell stories that dispelled prejudice, shone a light on phenomenal but often overlooked and under-funded people and projects, and told human stories that challenged and changed perceptions. Her work took her all over the world to the street dances of Kingston, Jamaica; music classes in HM Prison Brixton; and to Africa’s first state of the art open heart surgery hospital in Sudan. These experiences gave her a bird’s eye view of global injustices, disparities and the power structures maintaining this status quo.

After having a series of articles pulled from broadsheet papers due to disgruntlement about their content from the advertising departments, she became jaded with the industry and so began a period of exploration.

She dabbled in grassroots activism (well tagged along with real activists who blocked an oil rig for the day), did an apprenticeship at online petition site 38 degrees and helped to build cob houses in eco communities. She had a life changing conversation with Indian activist Vandana Shiva about the horrific impact of big agriculture on farming communities in India. It was a lightning bolt moment that inspired her to dive into community food growing, take multiple Permaculture courses and become a food growing apprentice for Growing Communities, an urban food growing and veg box scheme.

A vegetarian since childhood and vegan since she was introduced to ital food – vegan Caribbean food eaten by Rastafarians – whilst traveling in Jamaica; food always played a huge part in Sarah’s life. She held regular gatherings in her garden nicknamed ‘Skank & Grills’, where she’d host enormous vegan buffets with reggae music as the soundtrack. She loved the family feel at these gatherings and the opportunity to change people’s hearts, minds and stomachs about ‘bland’ vegan food.

She was invited to assist with the writing of a funding bid for a local health food shop – Food For All. This bid was the origins of Made In Hackney, an all vegan community cookery school and charity that she has co-run with a phenomenal team of women since 2012.

Today the cookery school has worked with over 15,000 people across the capital inspiring people to grow, cook and eat more plants. Their work aims to tackle health inequalities, inspire people to transition to a more planet friendly diet in an inclusive and culturally appropriate way, and to provide opportunities and space to build community. During the height of the covid19 pandemic they pivoted their service to become a direct to door meal delivery service for households struggling to access food. By the end of July MIH has delivered over 45,000 meals, all by bicycle courier, and are looking at models to make this a part of the charities core offer for as long as the community needs it.