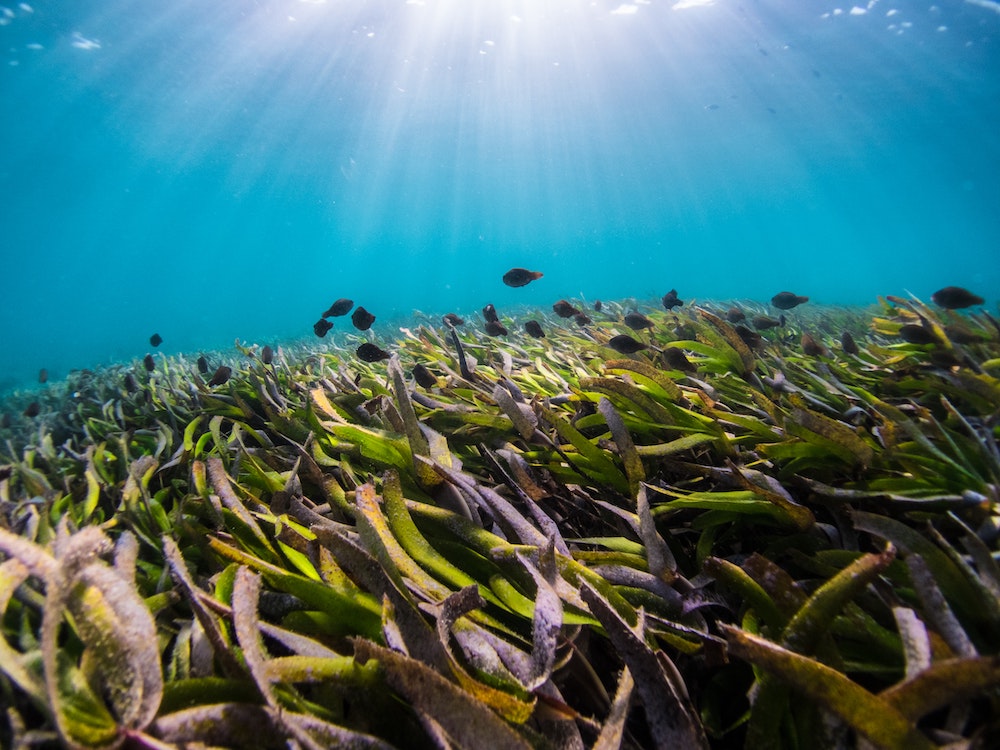 When you’re heading into the ocean for a refreshing swim, you’re probably not thinking too much about the little plants swaying about in the sand under your feet. But, you could be swimming amongst one of our most vital coastal ecosystems in the fight against climate change.

Similar to the coral reefs and rainforests found in the tropics, seagrass meadows form underwater gardens that play host to many different marine species. Occupying just 0.1% of the seabed, seagrass is responsible for 11% of the organic carbon buried in the ocean floor, capturing carbon at a greater rate than that of tropical rainforests.

But the ecological benefits of seagrass meadows don’t stop there. These marine environments not only supply 20% of the world’s fisheries, but also provide vital nutrition for close to 3 billion people, as well as 50% of animal protein to 400 million people in the third world, making them an indispensable resource to livelihoods worldwide.

Although seagrass meadows play a vital role in sustaining life both in and out of our oceans, their numbers are quickly declining. Human induced threats such as pollution, fishing, coastal development and physical destruction have contributed to a dramatic decline in the number of healthy seagrass meadows over recent years, and so Project Seagrass is on a mission to conserve and replenish these essential ecosystems.

“Project Seagrass’ really evolved independently in the minds of its 3 founders” says Richard Lilley. “Whilst pursuing masters degrees at Swansea University, both Benjamin and myself developed a passion for seagrass meadows and quickly realised that these ecosystems were under threat and being ignored in conservation agendas”.

“In May 2013, Ben created the ‘Project Seagrass’, as a platform to help deliver seagrass science to the public, using social media to aid in disseminating information. At the same time, myself, and our supervisor at the time, Dr Richard Unsworth, were looking to strengthen seagrass science in Wales and formed the Welsh Seagrass Network. Realising we were all on a similar page, in July 2013, Project Seagrass was officially ‘born’ (i.e. registered as an NGO out of my student house in Swansea!) with the primary belief that education is key in the fight to conserve seagrass”.

From research achievements such as contributing to over 70 scientific publications and hosting the largest International Seagrass Biology Workshop, to planting over one million seeds and aiding in filming of the BBC’s Blue Planet II, the organisation has gone from strength to strength as they gear up to celebrate a decade of conservation work.

With a string of accolades to his name, we’re delighted to welcome Project Seagrass Co-Founder, Richard Lilley, to speak at the upcoming Blue Earth Summit. Richard’s aim is for people to understand the importance of protecting these marine environments. He says “when it comes to business as a force for good, we have reached a tipping point that cannot be dismissed as a momentary response to a crisis”.

As part of our support of Project Seagrass, we’re thrilled to once again be working with Feel Good drinks for Blue Earth Summit 2022. With their People and Planet Fund, Feel Good have teamed up with Project Seagrass to support their groundbreaking marine conservation work.

When asked about why Feel Good was such a good fit for Project Seagrass, Richard Lilley says “Our values align. Feel Good wants to be a force for good by stepping up, encouraging dialogue, speaking out and making a real impact as a business on both social and ecological societal issues. Sustainable Development Goal 17, which was established by the UN in 2015, is about encouraging effective partnerships, and Feel Good’s support of Project Seagrass is a prime example of that”.

You’ll be able to hear Richard talk about ‘Business as a force for good’ at the Blue Earth Summit in October. You can download our 2022 Programme Highlights to get a flavour of what’s in store.

Discussing Sustainability, Supply Chains and the Power of Consumers with Kate Larsen